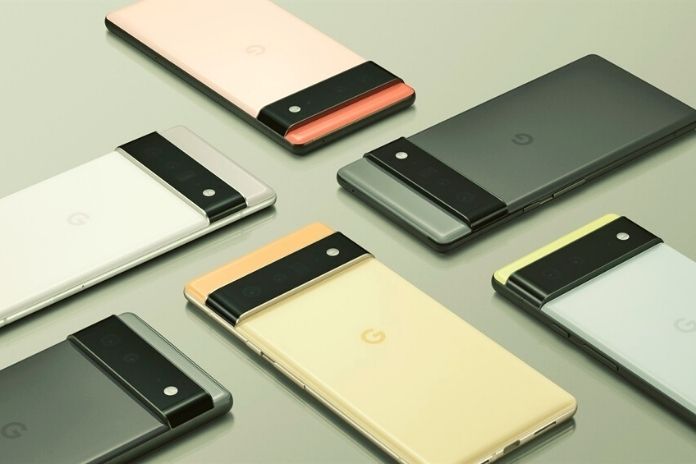 The Google Pixel 6 & Google Pixel 6 Pro were eagerly awaited. After all the tech company only revealed few specs before the official launch. In mid-October 2021, the time had finally come: the new Pixel phones were unveiled. These are real premium smartphones that are even superior to Samsung’s future flagships in one respect. You can find out more about this detail and all other information about the new Pixel Phones here.

Google calls the new Pixel smartphones “completely new inside and out”. With this claim, the internet giant has not promised too much. The design language has changed: the 6th generation pixel phones have a box-like shape, the rounded corners that once enclosed the screen of the previous models have given way. The notch is in the middle of the display instead of on the left, and the camera block on the back is elongated instead of square.

The stylish smartphones have a 6.4 (Pixel 6) or 6.7 (Pixel 6 Pro) inch OLED display. While the Pixel 6 has FHD +, the Pro version even offers QHD +. Both variants support HDR and have the full 24-bit color depth for 16 million colors. You can therefore look forward to high-resolution image content in vivid and intense colors. With an increased refresh rate of 90 Hertz (Pixel 6) or 120 Hertz (Pixel 6 Pro), both Google phones can be operated very smoothly. As screen protection, Gorilla Glass 6 (back) or Vectus (cover glass) comes from Corning. In addition, both Pixel Phones are certified with the IP68 protection class so that they are waterproof and dustproof.

The next innovation is the cell phone processor. Whereas Google installed a chip from Qualcomm in the previous Pixel 5 and Pixel 4 models, the tech group developed the CPU for the current model itself for the first time. The chip is called Google Tensor and is tailored to the new Pixel 6 mobile phones: Er ensures smooth, fast and efficient performance. Google promises that apps and pages will start and load faster. Even speech recognition and live translation are more innovative and more responsive. Both the Google Pixel 6 and the Pro version are therefore suitable as gaming phones.

As an innovative IT company, Google also relies on artificial intelligence: The security, photography and language functions are expanded with modern Google models for machine learning. Speaking of digital security: The Google Tensor is equipped with an additional security layer and uses the new Titan M2 security chip – this means that the Pixel smartphones are even better protected against malware and hacker attacks. Google is talking about the most secure Pixel Phones ever and will deliver security updates for the next five years. The lifespan of smartphones is therefore very long and sustainable.

The Intelligent Battery With A High Capacity And Quick Charge Function

Google installs an intelligent processor and an intelligent cell phone battery that should last a whole day. If you activate the extreme energy-saving mode, the runtime is even a full two days with a 100 percent charged battery. The turbo display scans intelligently adapt to a refresh rate of up to 120 Hz and down to 10 Hz to save the battery. In addition, the lengthy runtime is also due to the comparatively high capacity of 4,524 mAh (Pixel 6) and 4,905 mAh (Pixel 6 Pro). At this point, the Pixel Phones are superior to the future Samsung flagships: According to rum ours, the new models of the Galaxy S22 series will have a significantly smaller battery. In addition, the Google mobile phones have a quick charge function with 30 watts, which charges the battery by up to 50 per cent within 30 minutes. Inductive charging is also possible.

Android 12 For The First Time For The Pixel Phones

The Pixel 6 and Pixel 6 Pro are the first phones to feature the latest operating system from Google. Android 12 offers numerous new features and an even more intuitive operation. The Pixel phones are dual SIM cell phones, support the latest cellular standard 5G, Wi-Fi 6E and NFC. You can connect your smartwatch and Bluetooth headphones via Bluetooth 5.2.

The integrated smartphone camera again promises authentic and lifelike recordings. While the Pixel 6 comes up with a 2-camera system, the Pro version impresses with a 3-way camera. Google has integrated a completely new camera system into both models: the 50 MP primary camera with a wide-angle takes pictures with up to 150 per cent more light so that you can take sharp pictures even in poor lighting conditions. In addition, both Pixel phones have a 12 MP ultra-wide-angle camera for panoramic shots. The additional telephoto lens in the Google Pixel 6 Pro has a resolution of 48 MP. In addition to OIS (optical image stabilization), there are modern camera features, including motion mode, magic eraser, and blurring from faces. The pixel-Phones (6 pixels) and 11.1-MP are suitable with the 8-MP (pixels 6 Pro) front camera as Selfie phones. Of course, you can also record moving images with smartphones: slow-motion videos are possible with up to 240 fps, while 4K time-lapse can be recorded with stabilization. The photographic possibilities that Google phones offer are varied.

Conclusion: The New Pixel Phones Are A Natural Alternative To Flagships From Apple And Samsung

The new Pixel devices from Google are positioned as premium smartphones and can keep up with the current flagships from Apple and Samsung. Numerous components can (so far) only be found in Google Phones: the custom-made Google Tensor mobile phone processor, the Android 12 operating system, the intelligent mobile phone battery and a few camera features. Therefore, it is not surprising that Google is calling for high prices: The Google Pixel 6 is available with 128 GB of flash memory for 649 EUR recommended retail price (RRP). In comparison, the Google Pixel 6 Pro is available for 899 (128 GB) EUR or 999 EUR (256 GB) MSRP.

With your one, you can combine the Google Pixel 6 with a fast LTE tariff. So you have mobile internet on the go-to surf, stream or work. You can find more top offers with the latest smartphones on the linked page.

ALSO READ: Database As A Service: 5 Convincing Arguments For Its Use

Techno Rumourshttps://www.technorumours.com
Technorumours.com is an internationally renowned website that publishes tech-based content exclusively. We are a team of dedicated and passionate souls who thrive to provide innovative content on the technology niche to our global audience.
RELATED ARTICLES
MARKETING