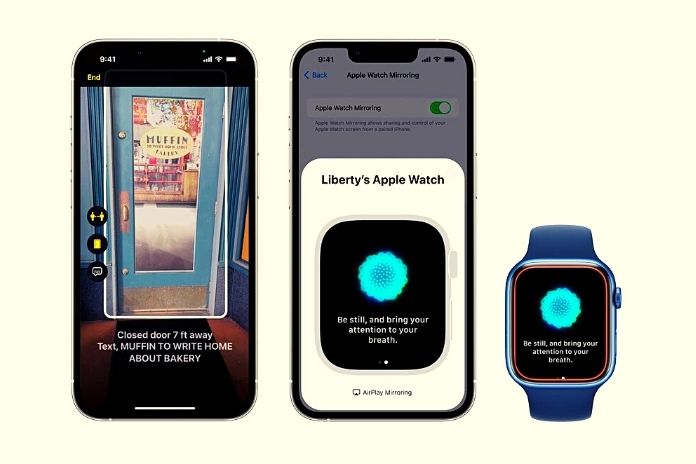 Apple plans to introduce several new features later this year. These include live subtitles and automatic door recognition. They should make it easier for people with disabilities to navigate, network, and communicate.

Door detection, live subtitles, and the so-called Apple Watch Mirroring: Are just a few of the new functions that Apple plans to introduce later this year to ensure greater accessibility on the iPhone.

In an official press release, the US company presented the new features and announced a release for the current year. The functions are primarily intended to help blind, visually impaired, deaf, and hard of hearing people navigate, network, and communicate.

Live Subtitles And Co: These Are The New Apple Functions

According to Apple, the new accessibility features combine the latest technologies from hardware, software, and machine learning. According to this, blind and deaf people and people with physical and motor disabilities should benefit from the innovations.

With Apple’s door recognition, the company wants to support blind people or the visually impaired. The function is intended to help users find a door when they arrive at a new destination.

The application communicates how far away the respective door is and whether it is open or closed. In addition, users are informed whether they need to press, pull or operate a button to open the door.

In addition, the door recognition should also be able to detect signs and symbols in the vicinity of the door – for example, a room number or the information for a barrier-free entrance.

The function combines the power of LiDAR, the camera, and on-device machine learning. In addition to this new navigation function, people with visual impairments can also use Apple’s Maps app’s acoustic and haptic feedback function to find the starting point for directions via Apple VoiceOver.

Physical And Motor Accessibility Features For The Apple Watch

The Apple Watch should become more accessible for people with motor or physical disabilities with the mirroring function. Users can remotely control the device via iPhone.

They can use functions of the iPhone such as voice control and switch control. In addition, users can make inputs, for example, by voice command, good action, or head tracking, without touching the display.

People who have limited ability to use their hands will also be able to use so-called Quick Actions in the future.

By squeezing their fingers twice, users can answer or end a call, dismiss notifications or take a photo, among other things.

The new Quick Actions are based on Apple’s “Assistive Touch” technology, enabling people to operate their Apple Watch simply by pinching their fingers or clenching their fists.

According to Apple, the new feature also applies to conversations “with someone next to you.” The font size can also be adjusted for live subtitles for easier reading.

The function is also intended to make group calls more comfortable for people with hearing impairments, as the participants in the call are automatically assigned transcribed dialogues. Users can also type in answers when making calls on the Mac, which are then read aloud to the others in real-time.

In addition, users can choose between dozens of new voices. In addition, Apple is adding a new text checking tool to detect and correct common formatting errors, such as double spaces or misspelled capitals. This should make it easier for blind and visually impaired people to write documents or emails.

Other Functions At A Glance

Apple is introducing the new accessibility features in time for “Accessibility Advancement Day” on May 19, 2022. It raises awareness and celebrates the digital accessibility and inclusion of more than one billion people with disabilities worldwide. According to Apple, all new features will be released gradually in updates over the year. The functions are currently not available.

ALSO READ: Artificial Intelligence For Everyone