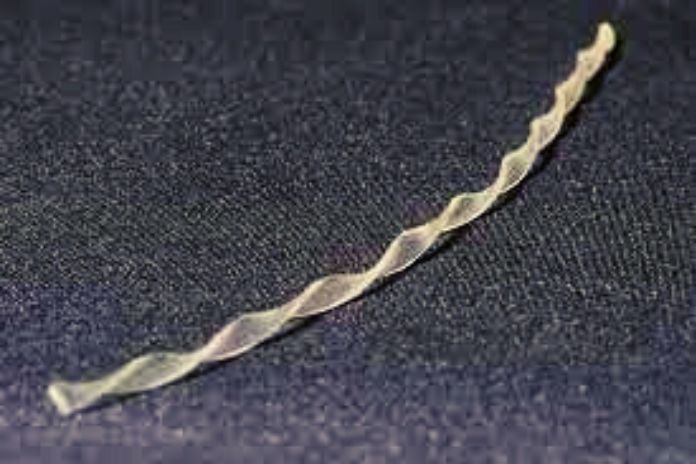 Researchers at the University of North Carolina have developed a so-called soft robot made entirely of plastic. Visually, it is reminiscent of fusilli pasta. It can move independently and negotiate obstacles – without computer chips.

When we think of robots, we probably imagine machines that do tasks for us with the help of artificial intelligence (AI). But that’s not the rule. Because as diverse as humans are, robots and machines are now just as various.

Researchers at North Carolina State University and the University of Pennsylvania are now taking a different approach. They have developed a robot that works entirely without cables or microchips. The so-called soft robot consists only of plastic and is shaped like a fusilli noodle.

The robot pasta can also move independently and reacts to the ambient temperature. For example, the soft robot rolls forward if the researchers heat a surface to over 55 degrees Celsius. The researchers published their results in the science magazine PNAS.

The Plastic Robot Finds Its Way Out Of The Maze

In an experiment, the scientists exposed the robot to a maze. Depending on which parts touched the ground, the material expanded or contracted, creating a creeping movement. Thus, the robotic noodle moved through the labyrinth and encountered an obstacle from time to time.

While trying to overcome the obstacles, the robot kept hitting a wall until it took a different direction. As a result, the plastic robot eventually found the exit at a speed of 3.8 millimeters per second.

Robot Pasta: Is It Possible To Use It In The Human Body?

The robot is not intelligent. Still, there are potential uses. The researchers believe that self-moving constructions are suitable for exploring the environment. To do this, however, they would have to be equipped with sensors to forward information.

But there are also possibilities in medicine: shrink to microscopic size, use in the human body is even conceivable. The only important thing is that there is always enough ambient energy for the robot to be able to move. Because without the influence of power, it simply remains a noodle.

ALSO READ: In The Future, Robots Could Heal Our Bodies From The Inside Out